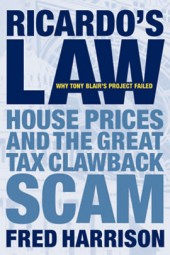 Fred Harrison is a Director of Economic Indicator Services (UK). After a career as an investigative journalist, he was advisor to a number of Russian academic and political bodies, including the Duma (parliament), in their efforts to implement a more equitable transition to a market economy. Recently he has turned his attention to the failure of economic analysis and public policies in the market economies. He is also Executive Director for the Land Research Trust.

This book offers the first comprehensive assessment of Tony Blair’s premiership and his Third Way project. It reveals the hidden flaw in the market economy which explains why politicians, of all parties, cannot keep their grand promises.

‘This is the fundamental reason … why the welfare state of the past 60 years has not worked’
Ashley Seager on Guardian.co.uk

‘If the government were to carry out its revenue-raising function intelligently and fairly by replacing revenue from more damaging taxes with revenue from land value taxation, the changed price structure would enable the market economy to operate more freely and efficiently. That would go far to eliminate some of the problems that conventional economists now call market failure’
James Robertson in WORKING FOR A SANE ALTERNATIVE

‘The effect of charging a levy on the annual value of land would be much more than most economists will acknowledge … [benefiting] those struggling to enter the housing market … Don’t take my word for it. Read the book and become a knowledgeable advocate to help bring it about’
Dr Francis Smith in ROOF

‘The argument for land value taxation is gaining ground among academics (although not politicians) and the book is a tour de force of the whole debate. For that it deserves careful study and Harrison deserves great credit ‘
Dan Lewis in PLANNING IN LONDON

‘’… without a knowledge of [the law of rent], it is impossible to understand the effect of the progress of wealth on profits and wages, or to trace satisfactorily the influence of taxation on different classes of the community’
David Ricardo

Blair promised to reform the Welfare State – the pact between people and their governments to abolish the evils of poverty and ignorance. In fact, however, despite a record three election victories in a row, the gap between rich and poor widened. The reason, the author argues, is the method government relies on to raise taxes. Contrary to intention, the tax burden on low-income earners increased, while property owners have enjoyed record capital gains. The outcome is over £1trillion indebtedness which renders tens of thousands of families vulnerable to bankruptcy and the loss of their homes in the next recession.

Public spending, for example on roads, railways, schools and hospitals, makes a major contribution to rising land values. These benefit house and other property owners, rich ones more than poor ones, desirable locations and asset-rich parts of the country more than poor ones, but those who rent their properties do not share in the windfall gains. In fact, they have to pay rising rents.

Taking Britain as a case study, Harrison escorts the reader along an old Roman road from south to north to pin-point how poverty is institutionalised in the growing divide between rich and poor. Along the way he illuminates the inner workings of tax policies and property rights that similarly afflict all market economies

Tax reform is on the political agenda in the West, but politicians continue to believe their consultants who tell them that ‘broad-based’ taxes are necessary. Harrison challenger this conventional wisdom and explains that the market economy needs to integrate the prices charged for public services with the prices charged for all other goods and services. This model is based on people, including the rich, paying for, and in proportion to, the benefits they receive, which really would be progressive.

This reform has a further benefit. It would enable the European and American economies to face the challenge of the newly emerging economies and remain competitive in the global markets of the 21st century.