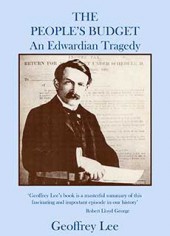 Born in Kent, Geoffrey Lee was one of the authors of a major work on world trade and for many years worked on yearbooks for the Financial Times. The author of many short stories and articles in the national press, he became assistant editor of an architectural magazine and then deputy editor of Country Life. In retirement he worked for the Historic Houses Association.

Although the Edwardian period may in retrospect appear to have been a golden age, it was in reality a time of much turbulence in the political and social fields. There were long and often violent strikes in the docks and coalmines as well as in other less vital industries. Poverty was endemic, and it was the fear of the creation of a semi-criminal underclass as much as feelings of benevolence that led during this period to the beginnings of the welfare state.

‘Lloyd George and Churchill took the lead by framing a new budget, in which a large proportion of the revenue was to come from a tax on the rental value of land. This People’s Budget was debated repeatedly and finally passed through the House of Commons in 1909. In 1920, the Coalition government abolished it altogether. I think Lee deserves admiration for his simple and straightforward storytelling and for having the courage to treat the subject with the kind of dignity it deserves.’
Georgist Journal Winter 2009

‘Lee’s book is a well-written account of the machinations leading up to and surrounding a key moment for the modern world. The story Lee tells will surely become an increasingly important political and social reference in a post-recession world.’
Land & Liberty Winter 2008/9

‘Some historians argue that the introduction in 1908 of old age pensions, and unemployment benefits, for the very poorest class in Edwardian Britain, made the difference ten years later between revolution and democratic ‘evolution’. Under Lloyd George’s premiership in 1918-22, Britain experienced social dislocation, strikes, high inflation and unrest, but did not follow Russia and Germany towards revolution.’
From the Foreword by Robert Lloyd George

Lloyd George, the Chancellor of the Exchequer, needed to increase taxation to meet the cost of the recently introduced old-age pensions and, in his 1909 budget, he proposed his famously controversial land taxes. These were based on Henry George’s philosophy as expounded in his economic bestseller, Progress and Poverty, published in 1879. Gladstone had incorporated his ideas in the Liberal Party’s programme.

The House of Lords, set on defending the interests of its members, rejected the budget, in the process breaking an unwritten rule preventing it from opposing ‘money bills’. In return the Government threatened to create enough Liberal Peers to outvote the Conservative majority. In the end the Peers backed down and the Parliament Act of 1911 established the supremacy of the elected chamber over the Lords.

The land taxes, badly drafted and never fully implemented because of the start of the First World War, were abolished in the 1920s. This book concludes by looking at the attempts and failure of subsequent governments to devise acceptable methods of separating the public from the private revenue of land to recoup for the community what the community itself creates, the heart of Henry George’s argument..