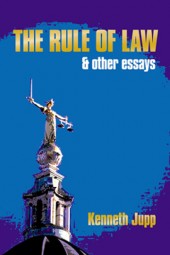 Sir Kenneth Jupp, awarded the Military Cross for bravery at Anzio in Italy in 1944, went on to become a barrister at the Temple in London where he later became one of the leading parliamentary Bill draughtsmen before becoming a High Court judge in the Queen’s Bench Division

The challenge of the twenty-first century is how to establish access to the resources of the earth for the whole population so that the able-bodied can support themselves. The welfare state can then be slimmed down to no more than is necessary to provide for the diseased and disabled. These constitute only a small minority who could then be provided for with more generosity than at present.

Kenneth Jupp asks: ‘Or is the search for justice in vain? Is justice to be found anywhere in this world of ours? There are glimpses of justice to be seen – in nations, in government, in law, in philosophy, in science and religion, in money and banking, in capitalism and in socialism. We need only eyes to see it and love to bring it to birth and give it expression’.
Such words accurately sum up the wide perspective of this important book. The question he poses and the answers he supplies must be of great importance to the thinking citizen of today. I commend this book to anyone who wishes to follow in the footsteps of a wise man.
L L Blake LLB, author, lecturer and barrister

`The rule of law is the foundation of civil society. It establishes a transparent process accessible and equal to all. It ensures adherence to principles that both liberate and protect. The IBA calls upon all countries to respect these fundamental principles. It also calls upon its members to speak out in support of the rule of law within their respective communities.’
International Bar Association 2006

Drawing on his fifteen years’ experience as a High Court judge in England, the author explores the concept of justice in seven essays. He acknowledges that definition is far from easy but argues that justice today tends to be confined within the phrase ‘social justice’, which is inextricably bound up with the remedies promoted by socialist governments – even the policies of ‘right-wing’ governments in the West are to some extent based on socialist principles.

If justice is a difficult concept, injustice is not – the media have no difficulty finding injustices to report every day of the week. If sufficient indignation is aroused, governments feel bound to take action, usually without first inquiring into the cause of the injustice. The result is that the new laws sooner or later breed additional injustice – ‘two wrongs don’t make a right’.

In search of justice, the author has turned to the scriptures, history, law, philosophy, science, government and political economy. The first essay examines how the English nation was shaped from the successive waves of invaders under the guidance of wise men with a strong sense of justice. The second essay explores the tensions between freedom of the individual and government, noting the connection between land enclosures and poverty which had a considerable impact on freedom. The third essay looks at the rule of law with reference to the American Declaration of Independence, the English approach, Blackstone’s Commentaries, the French Revolution and modern attitudes. The fourth essay discusses the unnecessary conflict between Philosophy, Science and Religion and tries to show how they could support each other. The fifth essay deals with money and banks, explaining how money acts as a means of exchange and a store of value, and the current role of banks in creating a debt-ridden society. The sixth essay looks at the capitalist society, the problem of poverty that blights progress in the means of production and the philosophy of some of the founding fathers. The final essay looks at how socialism has tried to ameliorate the worst excesses of unbridled capitalism, but in the process has spawned injustices of its own. It concludes with some suggestions how to restore a greater measure of justice in the economic realm.

Globalisation for the Common Good