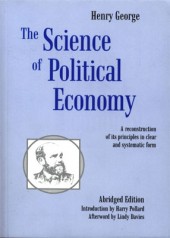 Born in Philadelphia in 1839, Henry George went on to San Francisco and became a newspaper editor who addressed the social problems of his day. On a visit to New York, he was shocked by the contrast between wealth and poverty. He resolved to find a solution, if he could. The result was Progress and Poverty, published in 1879, which is said to be the all-time best selling book on economics. The Science of Political Economy was his last book which he almost completed before his death in 1897. It was begun after he took part in a debate when his German-trained opponent defended what has since become the progressive income tax and welfare state. It was clear to George that America, having taken this road, would find it rough and perhaps impassable. George warned that ‘the milk-and-water socialism’ that has marked this century would prove to be a road that leads to revolution and chaos.’

A new abridged edition of George’s last work. Extends the classical analysis of Adam Smith and the Physiocrats on the nature of wealth and value, cooperation and exchange, space and time.

Henry George realised that the lack of a clear understanding of economics was the main obstacle to realising the reform he proposed in Progress and Poverty. In this book his aim was to set out ‘in clear and systematic form the main principles of political economy.’ He explained its importance: ‘Of all the sciences, political economy is that which to civilised men of today is of the most practical importance. For it is a science which treats of the nature of wealth and the laws of production and distribution; that is to say, of matters which absorb the larger part of the thought and effort of the vast majority of us – the getting of a living. It includes within its domain the greater part of those vexed questions which lie at the bottom of our politics and legislation, of our social and governmental theories, even, in larger measure than may at first be supposed, of our philosophies and religions. It is a science to which must belong the solving of problems that are in all civilised countries clouding the horizon of the future – the only science that can enable our civilisation to escape already threatening catastrophe.’

Abridged by Lindy Davies to make it accessible to today’s readers.