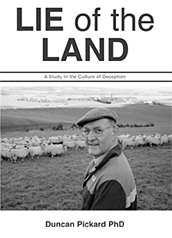 Duncan Pickard, received his doctorate from the University of Nottingham. After postdoctoral research at Cornell University School of Veterinary Medicine and the Mayo Clinic in Minnesota, he returned to Britain and was appointed lecturer in Animal Physiology and Nutrition at the University of Leeds. He now farms in Fife with his wife and two sons.

The culture of deception that underpins the economics of agriculture is documented by Dr Duncan Pickard in this hard-hitting exposé. Governments and lobbyists manipulate statistics to disguise the real incomes of farmers, to justify the subsidies that enrich a relatively few big landowners. But in doing so, they abuse the interests of consumers and taxpayers.

Dr Pickard, whose family farms 1,100 acres in Scotland, takes no pleasure in revealing the scandal in which farmers are portrayed as living on the breadline – when many of them are banking handsome profits from the Common Agricultural Policy. His family intends to reduce dependency on subsidies, so that more time can be spent with the cattle and sheep rather than with the paperwork that disrupts the business of producing food.

Subsidies, argues the author, are the result of a tax regime that has crippled rural economies and village communities. Taxes encourage the sacking of employees in favour of capital-intensive methods. And those subsidies become the war chest for the big landowners, who are able to finance the purchase of even more land. That is how family farms are extinguished. The Blair Government’s plans for countryside reform, announced in the House of Commons in February 2004, will add new layers of bureaucracy to preserve a doctrine of economics that will continue to drive people off the land.

Dr Pickard proposes the remedy. Government should tax the value of his 600 acres – and abolish the taxes on people’s wages and on the savings which they invest on the land. That, he explains, is the path to sustainable farming and conservation of the environment. It would deliver a fair deal for farmers and consumers, and remove the red tape that engulfs the people who are supposed to produce our food.