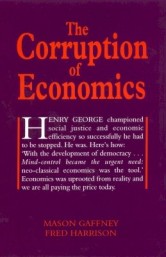 Edited by Mason Gaffney and Fred Harrison. Additional contribution from Kris Feder.
Mason Gaffney is Professor of Economics at the University of California, Riverside. He has written extensively on various aspects of resource economics, urban economics, tax policy, and capital theory.
Fred Harrison is Research Director of the Land Research Trust in London.After a career as a Fleet Street investigative journalist he was consultant to a number of Russian academic and political bodies, including the Russian parliament, in their efforts to implement a more equitable transition to a market economy. More recently he has turned his attention to the failure of economic analysis and public policies in the market economies.

The mystery of persistent economic failure is explained. The authors accuse the founders of neo-classical economics – the paradigm taught in schools and universities – of compromising the integrity of their discipline for political reasons.

‘Gaffney’s contribution is both timely and interesting.’
JOURNAL OF ECONOMIC LITERATURE

Blazoned across the front cover of The Economist in the Summer of 1997 was the title of its editorial: ‘The Puzzling Failure of Economics’. The occasion for this frank admission was the publication of a new edition of Samuelson’s Economics, probably the most widely used textbook in universities according to The Economist. The article concluded that it ‘is not a failure of economics, in fact, but of modern (one might say Samuelsonian) economics.’ More than ten years later, modern economics has still proved a ‘failure’ and offered no viable solutions to causes or consequences of the recent financial crash.

The authors argue there is nothing puzzling about this failure. They document how the integrity of economics as a discipline was compromised towards the end of the nineteenth century with the rise of neo-classical economics. Classical economists like Adam Smith had described wealth as the product of three factors – land, labour and capital, whereas the neo-classical school reduced this to two – labour and capital, subsuming land within capital.

While this paradigm change was a successful political ploy at the time, undermining arguments in support of the controversial economic reform called for by Henry George in Progress and Poverty, the authors point out it deprived professional economists in the capitalist world of the ability to diagnose problems, forecast trends and prescribe solutions, thereby condemning the 20th century and beyond to protracted periods of economic failure. Socialist and Marxist economists were no better: they too failed to recognise the significance of land in the economy, leading to even worse levels of environmental degradation.

If the full potential of the market economy, the economics of abundance, is to be enjoyed by everyone, the authors argue, taxes must be transferred from the production and consumption of wealth onto the rent of land. This tax reform would lead to a more efficient economy, a more equitable distribution of wealth and greater protection for the environment. This book is for those who know there is something wrong with our current system and want to discover more about what this is and what can be done to put it right.