Argues that not only does taxation flout the principle of private property, but it ‘is a primal cause of both inflation and unemployment. Regardless of this, the freely elected governments of contemporary trading economies – with the acquiescence of their electorates – persist in raising the major part, if not all, of their revenues by means of taxation. The immediate cause of such action by governments, and the acquiescence of their electorates, is ignorance of any acceptable alternative method of raising sufficient public revenue.’ 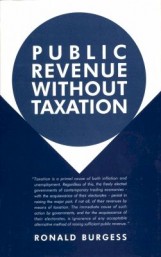 George Osborne has invited the public’s views on what might be done to help the country out of its current financial crisis. It is to be hoped that he will seriously consider all that is suggested; he needs to be looking out for ideas that are different from those that have hampered genuinely sustainable economic development for decades. He would do well to bend his eye in the direction of the taxation system; not to see if a little tweak here and there might increase revenue without too much pain but to look at the fundamentals.

We do not design road vehicles with unround wheels but we have an economy with comparably unsuitable features. The only circular motion is in those ideas that set off in promising directions, only to return to their starting point.

In 2007 we suffered a financial earthquake. It would be foolish in the extreme to rebuild our economy upon the same foundations whose weakness led to the catastrophe. The banks were blamed and they were certainly very irresponsible. So too were the government(s) who failed to impose sufficiently robust regulations on them, to prevent them from their own stupidity. It is said that the banks could not be allowed to fail because they are vital to the economy. The logical argument following from that is that the banks should be nationalised or at least kept under close regulation, however much they howl about it.

The banks’ blunders, serious though they were, could hardly have happened were it not for the existence of a market in land values, popularly and grossly inaccurately referred to as the property market. In the same way that land itself is fundamental to our very being, so the operation of the land values market is the basis of our economy. Every economic activity involves land (that is, all natural resources) directly or indirectly.

If conventional thinking on economics continues to determine policy, we shall be in the doldrums for years. There is an alternative: Land Value Taxation (LVT). This has the twin merits of requiring all occupiers of land to pay an annual fee (tax, if you like) for their security of tenure, and at the same time, raising revenue for government.

Shifting taxes off enterprise and effort onto LVT would improve Gross Domestic Product (GDP) by a very substantial margin. If we were to opt for LVT now, we could pass through the doldrums rather more quickly. That ought to appeal to our coalition government, which must need all the help it can find to keep the cynical, prowling media off its back. The government needs to show that its coalition works and LVT is the tool to prove it.

Many people in the UK will already be suffering varying degrees of financial ‘discomfort’ through no fault of their own as a result of 2007. Quite clearly some new thinking is called for in the unprecedented situation that has been foisted upon us. Faith in and respect for government has diminished to a frightening extent over the past two or three decades. The standard of political leadership must to be raised, to restore confidence in the institutions that have so much control over our lives. A constructive dialogue between government and people, by whatever channels, could be a good starting point.

Adrian Hoare has been a supporter of Land Value Taxation (LVT) almost all his adult life. Like others of a similar persuasion he is frustrated that it is still unknown to most people but he is heartened by the increasing mentions of it in the press and on television. He has written many letters to newspapers over the years, both local and national and has had two printed by The Financial Times. He views the current economic crisis as an opportunity to open people’s eyes to LVT as a means of mitigating its worst effects.

As a former ‘one-person’ company he was required to maintain a payroll and to account for VAT. This first-hand experience has led him to compile some harsh observations on and examples of the mind-bending complexities of the UK taxation system. The contrast between that particular millstone around the nation’s necks and the elegant alternative of LVT is what helps maintain his continued campaigning, albeit on a modest scale.