John Stewart is the author of three historical novels: The Centurion, The Last Romans and Marsilio. In Prime Minister and two companion novels, Visitors and The President, he turns his attention to the present time and explores the contemporary relevance of Land Value Taxation.

He has also written a biography of Andrew MacLaren MP, Standing for Justice 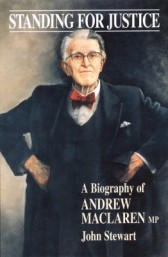 Take the example of a parent and child: it is possible both to punish and to love when the punishment is directed to the good – that of teaching the child right and wrong. However, if one claimed to love a person while exploiting them, the spectre of hypocrisy would immediately arise.

It is sometimes said, albeit cynically, that the rich help the poor in order to enjoy their privilege with a better conscience – a barren attitude, considering the generous response to disaster appeals, yet one that may conceal some truth.

The Christianity of Wilberforce could not live with the barbaric injustice of slavery. For, how could you love your neighbour as yourself if you enslaved him? Yet many lived with such a system. It was simply how it was, so the mindset of the status quo was left unquestioned.

Today, it is a common cry that the rich are getting richer while the poor still languish.  Secular, socialistic governments have tried to mitigate with subsidies and benefits, yet little changes. Indeed, after thirteen years of Labour Party rule, the gap between rich and poor has widened. Yet both the previous and the current government would claim to be benevolent in intention. No doubt they are, but the fact remains that poverty remains to blight most corners of the kingdom.

The elements of nature are given to all. None are labelled with predestined ownership. To claim the Sun’s light, or the air we breathe, would be ridiculous. And the gentle rain from heaven, as Shakespeare calls it, falls on all, alike. However when it courses on the land as rivers, the element of ownership enters. For land, the fourth great element, is subject to the law of real estate – in other words, private ownership. This is man’s decree, not nature’s, for nature gives her elements free.

Here man departs from nature’s law and the consequence is inequity. Sometimes this inequity is grotesque, with palatial mansions and teeming ghettos living in proximity. Yet such is the world order, the mindset of the status quo that no one questions.

How can we profess to love our neighbour when we perpetuate this gross inequity in our midst? Yet, the mindset of the status quo has ruled for centuries. With custom so ingrained, it’s not surprising that the glaring parent of inequity is left unchallenged while socialistic answers are adopted. Yes, centuries of custom are convincing, but we might well ask – how many years does it take before a wrong becomes a right?

‘Poverty is not a normal state of society. It is a disease produced by the stupidity of men.’ Andrew MacLaren

Standing For Justice, A Biography of Andrew MacLaren MP by John Stewart