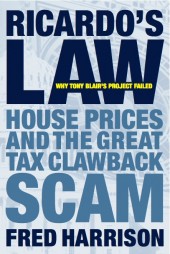 This book offers the first comprehensive assessment of the failure of governments, and in particular that of Tony Blair, to usher in a more equitable social order. The reason, Harrison reveals, is a hidden flaw in the market economy, which means that governments of all parties transfer money from people on the lowest incomes to asset-rich investors. This was not the intention of the designers of the Welfare State, which was supposed to equalise standards of living. The process has remained unrecognised because the transfer operates unseen through the ‘invisible hand’ of market forces.

‘This is the fundamental reason … why the welfare state of the past 60 years has not worked’ Ashley Seager, The Guardian

In the Preface to his Principles of Political Economy and Taxation David Ricardo wrote:

‘… without a knowledge of [the law of rent], it is impossible to understand the effect of the progress of wealth on profits and wages, or to trace satisfactorily the influence of taxation on different classes of the community’

In Ricardo’s Law Fred Harrison illustrates, with reference to Britain, how the failure of economists, policy-makers and politicians to understand the Law of Rent impacts on wages, profits and taxation. In the essay below, Michael Hawes provides a short explanation of the concept of the Law, also known as ‘Ricardo’s Law’ after the economist who provided the first scientific explanation of how it works.

What does this sentence mean and what possible relevance can an obscure theory propounded by a near forgotten stockbroker have in the complicated economic structure we live in today? The answer is that if politicians understood this simple proposition it would make their job of collecting taxes so much easier and more efficient. In fact they could reduce the national debt and budget deficit in a very short time.

The first thing we have to understand is that the term ‘rent’ as used by the classical economists is different from the term we use today to describe payment for the hire of a premise, tool or piece of equipment. Economic rent is a surplus, not a charge.

Consider a simple example. It is obvious that fruit trees and berry bushes will give a greater yield if they grow on the more fertile soil than poor soil. Pasture will be lusher where it receives more rain and sun. Shoals of fish will be spawn where there is a plentiful supply of food. Where natural conditions are favourable the harvest is more abundant.

By ‘application’ Ricardo meant labour and tools. Two men work equally hard picking plums for 1 hour. The plums on the first tree are larger and easier to pick than they are on the second tree. This enables one man to pick 4 baskets of plums in the hour while the other can manage only 3 baskets. Equal labour; equal time; one extra basket due to the more favourable position of the tree, not the labour of the picker. So the economic rent – that which is determined by the excess of product over that which the same work secured from the least productive tree – is one basket. The extra basket, or surplus, can therefore be seen as a gift of nature. As a gift of nature, should anyone lay claim to it? If it belongs to nobody, why not share it for the good of everybody?

Sharing the excess is the key to establishing a fair and just society based on equal rights and equal opportunity. The alternative, as we are all well aware, is to raise public revenue by taxing wages, goods and services with the result that production is discouraged and we have less to spend. The level of wages is so low that 3 million families live below the poverty line and depend on benefits paid for by taxation.

Now let’s translate the agricultural example into an everyday context using another simple example of how the Law of Rent operates.

Every busker on the London underground knows that the top spots are Victoria, Oxford Circus and Tottenham Court Road because they are the busiest stations where several lines intersect. It is not worth the effort of performing at quiet stations in the suburbs. However, these least appealing stations are important in understanding Economic Rent, as they are the ‘least productive’ or marginal locations, and set what are, in effect, rental values for all the better pitches. This is classic Ricardian theory.

When we look at a city skyline we see many tall buildings, but some are taller than others. As if the foundations of the taller structures were planted in more fertile soil. As indeed they are! High developments mean that the site is a popular centre and demand to occupy a space on a particular piece of land is high. Why? Location value!

Popular sites are busy and prosperous because they have good infrastructure and public services – transport links, pavements, street lighting and numerous amenities. These factors give central sites a special advantage, and the demand and competition to occupy them is reflected in land value and the price tenants are prepared to pay for the privilege of renting a building, shop or office. This begs the questions: who creates land value; and to whom does it rightfully belong?

Understanding the concept of Economic Rent can have far reaching implications and a profound effect on shaping a fair, just society where the dream of equal opportunity and rational distribution of wealth can be achieved. This theme is developed in another short paper – ‘The Law of Rent – the application’.