Land rights confer wealth, but not uniformly. Location matters – building Canary Wharf in a desert without the associated infrastructure would not have made anyone richer. The same effort and investment on a prime site yields a far better return than on a marginal one. The difference in house prices is not in the cost of the bricks and mortar but in the land on which the homes are built. Who benefits?

‘This book is a primer for anyone who wants to create a more equitable, efficient and sustainable Britain’
Chris Huhne 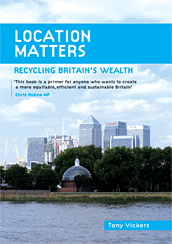 This paper examines how we might apply the Law of Rent today and the potential this can have on the provision of public services, taxation and a rational distribution of wealth.

In the paper ‘The Law of Rent – the concept’, it was suggested that if we understood the Law of Rent then the business of collecting taxes would be much easier and more efficient, and we could reduce the national debt and budget deficit in a very short time.

This paper sets out to explain how these objectives might be achieved.

Economic rent is a surplus – a value or a part of production that is not wholly due to labour but rather the location of where the labour takes place. A shop assistant in Oxford Street will make many more sales than an equally hard working person in Brentford High Street. The surplus production (extra sales) is solely due to the location of the store. Some plots of land are more valuable than others due to the facilities invested for the benefit of the community – transport links, etc – and the desire (and therefore competition) for businesses and individuals to occupy the best sites. M&S will pay a high rent for the benefits they receive from occupying their Marble Arch site because of the high footfall. Mr & Mrs Smith will pay a premium (estimated at £16,000) to buy a house in the catchment area of a good school.

Now we have to ask ourselves how is location value created? And who has a just claim to it? Simplicity is the key. Supposing a bombsite in central London had been held out of use from 1945 until the present day, its value would have increased a thousand fold. Yet it is the exactly the same plot in both size and position. It has not benefited society one iota. It has contributed nothing to production or the wealth of society. But it is now – even as a derelict site – worth millions. How has this value been created?

The answer is that the value has been created by the growth of the community and improvements to the infrastructure paid for by taxes. Now let us suppose that the owner of the derelict site decides to build a 30-story office block with a retail mall on the ground floor and basement, and provide access to the adjacent underground station. This prime site will attract all the major retailers, and businesses will want to occupy the office space. The rent they are prepared to pay will be based on two factors; how well the offices are equipped with modern services and energy saving devices; and the combined advantages and convenience that the location provides the business and its customers. The landowner charges for both.

What harm would it do to the landlord if a levy were made on the location value? Would it take from him anything that he had laboured for or earned? No, it would not.

What benefit would accrue to the community if, instead of taxing wages, production and exchange, a levy was made on the land rental value? Would it return to the community the value it creates in the land? Yes, it most certainly would! What could be fairer?

We know that we are in a precarious economic situation. We are told that the only way to reduce our deficits is to increase taxation and reduce public services. The simple truth is that neither one nor the other nor both will provide long term stability and economic growth.

The fact is that by a tax shift from wages and production to land rental value we can achieve a great many economic and social benefits. We can pay off our national debts; fund public services and improvements to infrastructure; provide opportunities for labour and capital to produce wealth; increase the demand for labour; increase the level of wages and increase demand for goods and services. Everybody will benefit.

An annual levy on land rental value is a just and fair way to raise revenue and establish a society based on equal opportunity. If it makes sense, why don’t we do it?