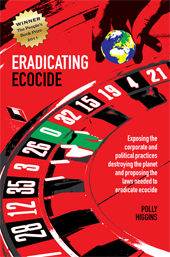 Voted the people’s favourite, Eradicating Ecocide by Polly Higgins is this year’s winner of The People’s Book Prize for non-fiction. The winner is chosen by popular vote rather than by a panel of judges.

Speaking from the People’s Book Prize Awards Ceremony, held at the The Worshipful Company of Stationers and Newspaper Makers in London, Polly Higgins said:

“This is such an honour. To have the support of the public for my work to make Ecocide the 5th Crime Against Peace is proof that we the people are finding voice and saying it is time to change the rules of the game. The People’s Book Prize is also about changing the rules of the game – by having the public vote for the books they believe in, means that we can hear from the people, people who would not normally be heard. For me this is very important. This is all about empowering the public to speak up for what they want to happen – and for their voice to be heard.To be voted by the people for my book has changed my life. I will remember this day as the day when we said that ‘We the people will eradicate ecocide.”

Eradicating Ecocide is the name of the campaign that Polly and her team are now launching to take Ecocide to the UN and make it law. You can read more about the campaign at her website.

The book is about a law that will change the world: that law is the Law of Ecocide. Polly proposed the law to the United Nations in April 2010 and she is now campaigning for it to be made the 5th Crime Against Peace, alongside genocide. Ecocide is the environmental equivalent of genocide. It is a little known fact that mass damage and destruction is outlawed as a War Crime but can and does occur on a daily basis during peace-time. This legal anomaly is what she is campaigning to have changed. You can help her do this by joining the campaign at www.eradicatingecocide.com.

Polly is a vocal campaigner for eradicating ecocide. She is also changing the face of campaigning by bringing law to the forefront of our way of thinking. Law as it currently stands is causing much of the ecocide: by having laws that put profit as the primary driver for business means that people and planet suffer. Those laws are no longer fit for purpose and she proposes that a new consideration be put first: the health and well-being of people and planet. Do that, she argues and we are radically changing the outcome for the Earth Community to a world where peace can finally be achieved.

On the 30th September 2011 in the UK Supreme Court the crime of Ecocide will be on trial for just one day, as if it were law. A CEO has been charged with Ecocide and he will be in the dock to answer to a jury. Real barristers and QC’s, including Michael Mansfield QC, will put the crime to him. After the event, press will be invited to a press-conference. The event will be live, and streamed online for all to watch. The jury will decide whether the crime of Ecocide has been made out. To find out more about the trial contact: fiona@thehamiltongroup.org.uk