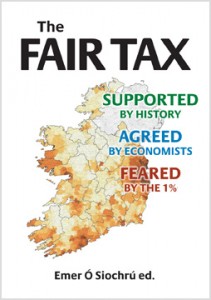 Emer Ó Siochrú, a registered architect and a development & planning valuation surveyor, is owner director of EOS Future Design. She has served on the boards of a number of statutory bodies and was a founder member and director of Feasta (the Foundation for the Economics of Sustainability) until 2011. In her spare time, she runs the Smart Tax Network for fiscal policy development.

The tax regime in Ireland, Colm McCarthy points out in his Preface, has been very favourable to property owners, but especially to developers who, together with their banks, took maximum advantage. It fuelled the disastrous property boom with the huge development-site debts racked up by a handful of avaricious developers, and led directly to the Irish state having to shore up the collapsing banks.

‘…This slim volume argues for a tax which could do more to bring about social and economic justice than any other step a government could take. The authors believe that Ireland is in danger of missing a golden opportunity to lead the way.’

Under pressure from the Troika rather than from a conviction of its merits, the Irish government is belatedly introducing a property tax. Instead, however, of targeting irresponsible developers, speculators and banks, the government is planning to bail them out again by excluding their land hoards and undeveloped sites from the new property tax. So that they can continue to pay nothing, ordinary home owners will have to pay at least 20% extra tax every year.

The argument put forward in this book is that how property is taxed can make a big difference both to government and the taxpayer. Most commonly property taxes are based on the full improved value of the property, but this means penalising those who improve their property. Basing property taxes on site value alone avoids this and encourages economic activity. It is an efficient tax both in terms of the low cost to the government in collecting it and to the taxpayer in paying it. It is fair and naturally progressive because the more valuable sites, paying higher taxes, will be occupied by the wealthier who will not be able to avoid it through tax havens etc.

Colm McCarthy has worked at the Economic and Social Research Institute, the Central Bank of Ireland and has undertaken assignments for the EU Commission and for the World Bank. Since 2005, he has been lecturing in Economics at UCD.

Dr. Constantin Gurdgiev, the Head of Research for St. Columbanus AG, and Adjunct Professor of Finance at Trinity College, Dublin. He was the author of the Macroeconomic Case for a Land Value Tax Reform in Ireland submitted to the Taxation Commission.

Ronan Lyons is an economist with experience in urban economics, public policy, national competitiveness, property markets and economic development. He is author of the Daft.ie Report and an economic consultant and commentator.

Judy Osborne, has served on numerous local government committees. She is currently working as an independent environmental planning consultant campaigning for responsible development and for Site Value Tax.

Dave Wetzel is CEO of Transforming Communities, a transport, housing, land tax consultancy he founded in 2008. For 8 years he was Vice-Chair of Transport for London. He is now serving as President of the ‘Labour Land Campaign’.