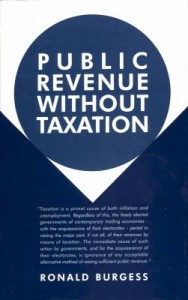 ‘At the end of the nineteenth century’, wrote the former Governor of the Bank of England, (The British Tax System, Mervyn King and John Kay, OUP, 1990 5th ed.) ‘a movement led by Henry George argued, vigorously, that … land should be the principal tax base. This tradition still survives, although it is apparent that the total economic rents, of all kinds, is not now a sufficiently large proportion of national income for this to be a practicable means of obtaining the resources needed to finance a modern State.’ This is a commonly held idea, even by those who are sympathetic to the idea of taxing economic rent. The authors began their next sentence with: ‘But the underlying intellectual argument for seeking to tax economic rent retains its force’.

Having been convinced of the efficiency and justice inherent in Henry George’s proposal for a Land Value Tax (LVT) to capture the economic rent, the author of No Debt High Growth Low Tax sought to find an example of where it was put into practice. As a frequent visitor to Hong Kong over many years, he became aware that its thriving economy, which had had to cope with housing millions of immigrants fleeing mainland China, was based on a system of leasehold, rather than freehold, land tenure. This means that a substantial part of government revenue is in fact raised from economic rent.

Just how substantial that is, is indicated by the fact that the Hong Kong government is able to fund major infrastructure projects, such as its underground railway and new airport, and education (free from 6-16, with subsidies for Nursery Schools, and higher education through a system of loans/grants for those who cannot afford it) without incurring the high levels of debt burdening most modern economies.

The curious thing, the author points out, is that very few people are aware of how it works, least of all those people who reside there and live with the consequences. The particular form of raising such revenue in Hong Kong is neither a complete system, having been introduced over the years in an ad hoc manner, nor one which has eliminated high levels of inequality.

However, what the system demonstrates is that economic rent is an enormous source of public revenue only partly tapped by the government, which only collects 3% of the rent on an ongoing basis, although it collects more in up front premiums for lease modifications, and new leases. The author outlines some of the features of the system in Singapore which also enjoys/relies on economic rent for a considerable part of its revenue and has no debt.