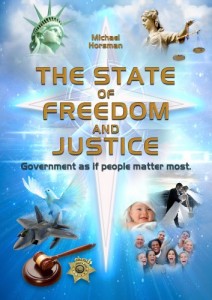 Michael Horsman lives in Ireland and knows from firsthand experience of farming and running his own business how restricting and unfair the tax system is.

Read more about Michael on his author page.

“It often happens that a quick opinion inclines in the wrong direction and after that the intellect is hampered by vanity.”  Dante

“The author’s greatest source of hope rests on generating widespread support for Henry George’s proposed shift from taxation to the economic rent of land as the source of public revenue. He takes the time to explain what this would accomplish as well as offering a plan for how it would be implemented.”   Edward J. Dodson

We all want freedom, we all want justice, yet few have given much thought to how such a state could be organised. The author, an original thinker, has taken a multi-disciplinary approach in seeking an answer, reading widely over 35 years in the realms of Politics and Economics, Sociology and Philosophy, History and Law. This approach has led to some surprising insights, rising above the current obsession of political analysis into left and right.

Comparing the consensus theory of the origin of the state, popularised by Rousseau, with the less well-known conflict theory as expounded by Franz Oppenheimer, the author argues that most states have arisen from the conquest of one class over another, or one tribe over another. Thus the modern state is characterised by a ruling class exercising the coercive power of the state, denying freedom and justice to the rest in varying degrees. Thus the state can be our greatest enemy – the 20th century provides plenty of evidence for that. It is not only totalitarian states which limit freedom: in demanding more and more of the welfare state, we are in fact forging the chains which bind us.

At the same time, living together in society, we need some body, some form of government to defend our territory and maintain law and order, and that needs to be funded. These functions, the author argues, set the limit to the state’s role; but he goes beyond the normal arguments for a minimal state, revealing how a shift from the current predatory taxation of labour and capital onto land would turn the revenue system into an intrinsic tool of justice.

A third feature draws on the work of Herbert Spencer who argued that as part of the function of maintaining law and order ‘it behoved the State to establish courts of justice, which would be easy of access, speedy in their decisions, and in which every man should be able to obtain the protection of the law, free of cost’.

These three elements, the Minimal State, the Single Tax and a free Judicial Service are mutually consistent and neatly dovetail to maximise the state of individual freedom and justice.