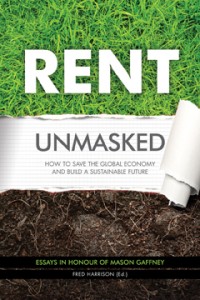 Rent Unmasked has been chosen for the Winter 2016/17 heat of The People’s Book Prize for Non-Fiction. This competition is based purely on public votes – so we need your help. Successful books from the heats are entered into the final, which occurs annually.

Rent Unmasked was published in 2016. It is a collection of essays in honour of Mason Gaffney edited by Fred Harrison. The authors are drawn from the legal and property professions and from universities around the world.

“The clear exposition of the merits of collecting land and natural resource rents whilst reducing or eliminating taxes on income earned by labour and capital is strongly recommended to all who wish to see economics recover its rightful place as the master social science.”
Brian Hodgkinson,  American Journal of Economics and Sociology

A number of readers have already voted for the book. Many thanks! As part of the voting process, readers can add an optional comment about their chosen book. Below are just a few of the wonderful comments which Rent Unmasked has received since voting opened.

“If only the wisdom contained in these essays and in Mason Gaffney’s own writings [would] find their way into the public dialogue over economic policy, the future would be much brighter than it is likely to be.”
“As world economies descend into a hopeless quagmire, the most obvious measure of the failure of modern economics is the extent to which we now allow publicly-generated land rent to be privately capitalised into ever higher land prices (and bubbles) at a clear cost to wages, earned profits and social health.”
“If you want to know how to cure the economic ills that produce vast inequalities, this is the book to buy. A thorough assessment of today’s economic system, written for the layman.”

If you have enjoyed Rent Unmasked and are a fan of Ethical Economics, Mason Gaffney, Fred Harrison or Land Value Taxation then please vote for the book in The People’s Book Prize before the end of February 2017. Thank you from all at Shepheard-Walwyn.