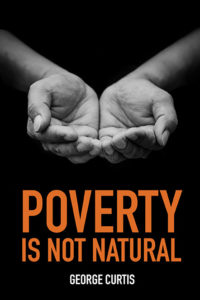 Poverty is not Natural
by George Curtis

Nelson Mandela maintained in his 2005 Trafalgar Square address that ‘Like slavery and apartheid, poverty is not natural. It is man-made and it can be overcome and eradicated by the actions of human beings’. He went on to say that ‘Overcoming poverty is not a task of charity, it is an act of justice.’

In Poverty is not Natural George Curtis, for many years a trade union organiser, looks to Henry George whose famous book, Progress and Poverty, probed the question of why it was that, as the Industrial Revolution increased wealth enormously poverty was not lessened.

More recently Nobel Laureate, Joseph Stiglitz, debated the cause of inequality with other ‘Celebrity Economists’ at an event organised by the Institute for New Economic Thinking in Paris in 2015. He concluded his remarks with:

‘There are actually a lot of policies one should think about, but one has always to think about issues of shifting so that, for instance, just a tax on capital might be shifted, and a lot of the models have shown this would happen, but a tax on land, rents, would actually address some of the underlying problems. This is the idea that Henry George had more than a hundred years ago, but this analysis that I have done, goes one step beyond Henry George. He argued that a land tax was non-distortionary, but this analysis says that a land tax actually improves productivity of the economy because you encourage people to invest in productive capital rather than into rent generating. Well, the result of the shift in the composition of the savings towards more productive investment leads to a more productive economy, and in the end leads to a more equal society.’

To read the introduction and first chapter click here.